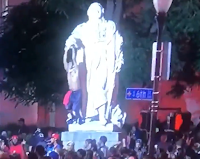 King Louis XVI was the monarch of France who helped American revolutionaries the most to free themselves from the rule of Great Britain.

The incident occurred in Louisville, itself named after the king. The statue itself had been gifted to Louisville by the French city of Montpellier about 60 years ago.

The tweet above shows large protests in the city of Louisville in Kentucky during the weekend. It shows that a man climbed up a statue of the French king Louis XVI.

Soon, the statute was damaged when a hand was removed and taken away by one of the rioter. A reporter on sight said the rioter “made off” with the hand. It is not clear if that is entirely accurate or not, although some of the protesters were reportedly observed passing the hand around shortly afterwards.

A protestor (at an overwhelmingly peaceful protest) in downtown Louisville has made off with the hand of the King Louis XVI statue pic.twitter.com/vnkq1xWvgQ

This vandalism of the royal statue soon caught the attention of the monarch’s descendants and two pretenders to the French throne.

His Royal Highness Prince Louis Alphonse of Bourbon, Duke of Anjou, commented on this incident first. He is the Legitimist pretender to the French throne. The Prince said:

“As the heir of Louis XVI, and attached to the defence of his memory, I do hope that the damage will be repaired and that the statue will be restored. I already thank the Authorities for the measures they will take for doing so”.

His Royal Highness Prince Jean, the Count of Paris, also reacted to the vandalism of the statue. He is, according to the Orléanists, the legitimate claimant to the throne of France. Prince Jean wrote in a statement:

“The hand of Louis XVI is the one that helped the US people to gain its freedom. I strongly regret this act of disrespect towards our common history. The loss of George Floyd’s life is far more serious than any material degradation. Few people know that Louis XVI abolished torture in 1780. I am convinced Louis would have been on George’s side”.