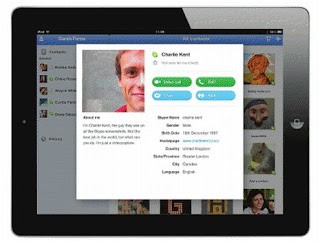 After a leaked video revealed an upcoming Skype iPad app with video chat, an executive for the company has confirmed the software is indeed coming soon and will take advantage of the cameras on the iPad 2. Skype hasn’t officially announced the release date of the app yet but the video of the app has been leaked on YouTube that shows Skype running on iPad:
TAUW had an interview with Skype VP of customer and Product Design Rick Osterloh which confirms that Skype for iPAd is under developement. Osterloh said:

The iPhone version of Skype burst out of the gate quickly, with a big launch and “a userbase that doubled in just a month’s time.” And he said the iPad version should “have a similar success,” especially since it’s basically the same in functionality: chatting, audio and video calling, and all of the other standard actions you can expect from Skype.

We’ll let you know as soon as we see the app hits the App Store. Seems like its not far away.