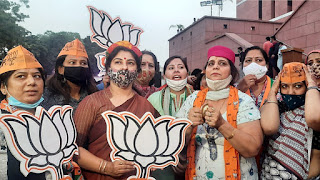 Similarly, the Bypoll results from 11 states were in favor of BJP who won 37 seats and leads 4 out of 58 of them.

Starting with Digvijay Singh, the Indian Congress leader and former Chief Minister of Madhya Pradesh, he reacted to the results by saying that “Selective tampering is done” in the EVM machine.

BJP RIGGED THE ELECTION. PLURALS VOTES TRANSFERRED TO NDA ON ALL BOOTHS.

Pushpam Priya Choudhary is a CM candidate for Bihar who gained fewer votes than the None of the above (NOTA) votes.

This entire scenario is in contrast with their reaction to the recent US elections where they are frequently asking Donald Trump to admit defeat in the elections despite the clear evidence of voting irregularities.