Apple Inc co-founder Steve Jobs died today at the age of 56 as he was suffering with pancreatic cancer since 2004. Apple’s official website’s homepage has been changed with the picture of Steve jobs captioned ‘Steve Job: 1955-2011’. 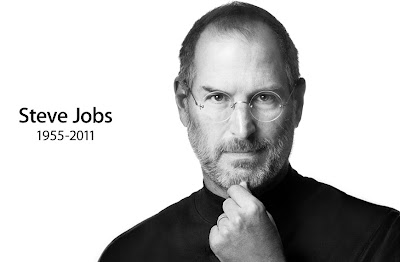 Apple said in a brief statement:

“We are deeply saddened to announce that Steve Jobs passed away today. Steve’s brilliance, passion and energy were the source of countless innovations that enrich and improve all of our lives. The world is immeasurably better because of Steve”

At the time of death, Steve was surrounded by his family in Palo Alto. His family said in a statement:

Steve died peacefully today surrounded by his family.
In his public life, Steve was known as a visionary; in his private life, he cherished his family. We are thankful to the many people who have shared their wishes and prayers during the last year of Steve’s illness; a website will be provided for those who wish to offer tributes and memories.
We are grateful for the support and kindness of those who share our feelings for Steve. We know many of you will mourn with us, and we ask that you respect our privacy during our time of grief.

Notable personalities in US including President of the Country Obama, Bill Gates, Mar Zuckerberg  and Eric Schmidt were also saddened by the death of Steve.
President of USA,Obama said:

Michelle and I are saddened to learn of the passing of Steve Jobs. Steve was among the greatest of American innovators – brave enough to think differently, bold enough to believe he could change the world, and talented enough to do it.
By building one of the planet’s most successful companies from his garage, he exemplified the spirit of American ingenuity. By making computers personal and putting the internet in our pockets, he made the information revolution not only accessible, but intuitive and fun. And by turning his talents to storytelling, he has brought joy to millions of children and grownups alike. Steve was fond of saying that he lived every day like it was his last. Because he did, he transformed our lives, redefined entire industries, and achieved one of the rarest feats in human history: he changed the way each of us sees the world.
The world has lost a visionary. And there may be no greater tribute to Steve’s success than the fact that much of the world learned of his passing on a device he invented. Michelle and I send our thoughts and prayers to Steve’s wife Laurene, his family, and all those who loved him.

I’m truly saddened to learn of Steve Jobs’ death. Melinda and I extend our sincere condolences to his family and friends, and to everyone Steve has touched through his work.
Steve and I first met nearly 30 years ago, and have been colleagues, competitors and friends over the course of more than half our lives.
The world rarely sees someone who has had the profound impact Steve has had, the effects of which will be felt for many generations to come.
For those of us lucky enough to get to work with him, it’s been an insanely great honor. I will miss Steve immensely.

Steve, thank you for being a mentor and a friend. Thanks for showing that what you build can change the world. I will miss you.

Steve Jobs is the most successful CEO in the U.S. of the last 25 years. He uniquely combined an artists touch and an engineers vision to build an extraordinary company… one of the greatest American leaders in history.

If you love something, you also love the creator of that thing. I love iPhone and I also loved Steve Jobs. May his soul Rest in Peace