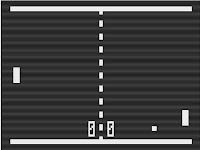 The first ever video game was designed by Willy Higginbotham. Willy was no young computer wiz kid, yet in the early 1940s.

He worked on progressive radar displays for B28 bombers and proceeded on to work for the Manhattan Project where he formed the timing mechanism for the first atomic bomb. In 1958, bored by the exhibitions of the Brookhaven National Labs annual open-day exhibition, Willy formed a tennis game simulation, the world’s first video game.