A woman from Netherlands tattooed her right arm with profile pictures of her 152 friends on Facebook. The tattoo design was done by Rotterdam-based tattoo artist, Dehvyathe Xaviera Moelker, also known as Dex. She also posted video of her tattooed arm on Youtube. 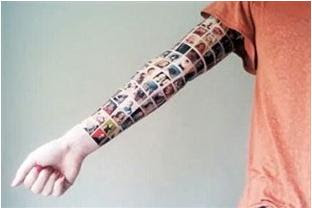 The women said “After months of work I want to show you all my social tattoo. Pretty amazing right? I’m really proud of it. Hope you like it too!”

It is reported that woman was inspired by Netherlands-based company Pretty Social which prints people’s Facebook friends’ photos on a range of products, from clocks, bags and IKEA furniture to a Mini Cooper car. Some YouTube users commented on this:

“What happens when someone deletes you? Do you blacken out their pic on your stupid arm?”

“I think she knows friends aren’t forever and all, but I also think the idea goes a bit deeper than that.”