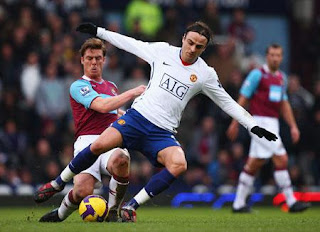 Preview:
Premier League leaders Manchester United will face West Ham United on 2nd April, 2011 at Upton Park. A win for United will further strengthen their lead at the top while victory for the Hammers will get them the 12th spot.
Currently, West Ham United are 17th in the table, with the same points as Wolverhampton Wanderers being 32. Avram Grant will certainly look to get an unlikely win for his team but it is looking almost impossible as Manchester United are looking impressive and determined more than anything at the moment. The Red Devils have won 3 of their last 5 games and the losses came from the hands of Liverpool and Chelsea last month.
West Ham vs Man United Match Details:
English Premier League
West Ham vs Manchester United
Ground: Upton Park
Kick Off Time: 12:45 GMT+00
Result: West Ham 2 – 4 Man Utd

Team News:
West Ham
They will stick to a 4-4-2 formation. Carlton Cole and Victor Obbina will play unfront and Robert Green will protect the net. Midfielder Scott Parker is also likely to start with the only unconfirmed player Piquionne remaining a doubt.
Man United
United will go for a 4-4-2 formation as well. Chicharito is likely to start alongside Rooney with Berbatov on the bench once again. Jonny Evans and Paul Scholes will miss the game due to suspensions. Moreover, Ferdinand, Fletcher, Owen Hargreaves , John O’ Shea and Rafael will not be playing due to various injuries.
Prediction: It is likely to be another United win but considering their away form this season, it may be of little worry. But that being said, United can finish the game comfortably.
Manchester United 2-0 West Ham United.