Report has come that a Sony server has been hacked to host a website for an alleged phishing scam targeting an Italian credit card company and its users, according to the web security firm F-Secure.This is what they wrote in a blog post on this hack.

“We know you’re not supposed to kick somebody when they’re already down … but we just found a live phishing site running on one of Sony’s servers.” 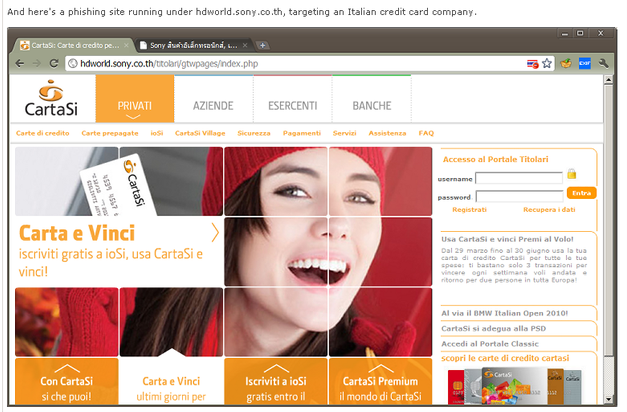 But it has also been reported that this security breach does not relate with the attacks that were responsible for the PSN shutdown that resulted the theft of personal data for more than 90 million customers.
Howard Stringer[Sony Chief Executive]apologized for the attacks, which resulted in the PlayStation Network and Qriocity being shut down on April 20, with a partial return on May 14, 2011. However many parts of the PlayStation Network, such as the PlayStation Store, still aren’t fully up and running as they were before.
The Web server used to host the phishing site is normally used to host Sony’s Thai site, F-Secure said, adding that it believes that the hack only affected a server that has no access to Sony customer’s personal information.
F-Secure said it has notified Sony of the attack, later blocking the URL for the phishing site. Sony officials were unavailable for comment on the matter on Friday morning. Also, Sony PSN is expected to return on May 24, 2011.