With the advent of the process of jailbreaking a device has come some great developers as well as some great tweaks or apps as well as some fantastic tools and utilities. All of these can be found within Cydia and can be downloaded through the Big Boss repository. 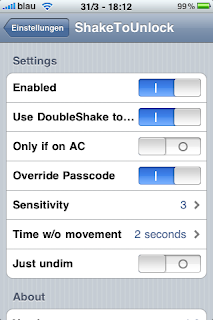 There are a lot of different developers. Some of them will remain nameless their whole lives. Others will make a place for themselves in the Hall of Fame for developers. One of these developers goes by the name of Yiller. He has developed several apps that have really helped the app community
.
The one app or tweak that we are going to take a look at today is the app found in Cydia known as Shake to Unlock. This tweak runs for all devices that run an iOS equal to or higher than 3.2, which includes the new iOS 5. This app offers some great features and gives the users a very efficient and worthwhile tool to use.
One of the first features is that it allows the user to unlock the device with a couple of shakes. You can even shake the device by moving it in an east, west, north or south direction. When you unlock it with your gesture, it will stay unlocked all of the time and is unlocked even when the screen is off. The app will not use up a lot of the battery. If you want to you can bypass or override the passcode that is in place. As a user, you will be able to undim your phone, but at the same time keep it locked. There are five different settings for the sensitivity of the shake.
As a free download for a device that has been jailbroken, it is very possible for you to see that there are a lot of opportunities with this application and they can all be configured by going to the preferences application that sits on the device.
One thing to note is that although one of the features is that it doesn’t use a lot of the battery, in the release notes of the app, it says that it uses about a quarter of the battery per day to run. So you want to check that out carefully if you decide to use this app.