Sony Ericsson’s Xperia Play also known as PlayStation Phone hits Verizon this May, 26th 2011. Pre-orders for the device, which features a sliding screen that reveals touch-sensitive directional pads and buttons for playing video games on the phone, begin May 19, Sony said.
Sony Ericsson’s Xperia Play will be sold for $199.99 with a two-year contract and will run on a modified version of Google’s Android Gingerbread operating system 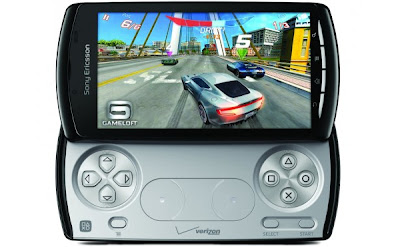 The Xperia Play is the first “PlayStation certified smartphone,” and will allow owners to download games for the device through both Google’s Android Marketplace and Verizon’s V Cast app store.
Seven games will come pre-loaded on the phone in the U.S.: Madden NFL 11, Bruce Lee Dragon Warrior, Asphalt 6: Adrenaline, The Sims 3, Star Battalion, Crash Bandicoot and Tetris. More than 50 other games will be available via V Cast when the phone launches, Sony said.
Past PlayStation games will soon go on sale in the Android Marketplace, in the form of Android apps, and Sony will use Android as the OS to power its next portable PlayStation gaming console, currently nicknamed the NGP. Sony hasn’t said whether it will have the NGP, Xperia Play or future PlayStation certified phones use the recently relaunched PlayStation Network to buy games and apps, as is used on the PlayStation 3 video game console.
Most notable features include 1GHz Qualcomm Snapdragon processor, a 4-inch touch screen, a 5-megapixel rear-facing camera and a VGA camera on the front for video chatting. You will also be able to connect your PlayStation phone to internet via 3G or Wi-Fi signals.