A plane in China had to be pushed half a mile by its passengers after landing. Chinese Shandong Airlines Flight CRJ7 arrived at its destination at Zhengzhou Airport in September 2008 with no problems…until breaking down shortly after it landed.

The plane had to be removed from the runway, and the only way to do it was to have passengers and airport staff push it! The arduous task of moving the 20-ton vehicle half a mile took the group nearly two hours! 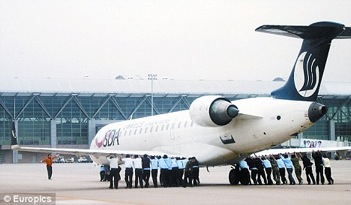