As we can hear every single day now, Pakistan has been accusing India, of killing Pakistan’s military and civilians, mostly the claims are about civilians.

But there’s a question, can we actually agree with Pakistan in this regard? Pakistan had denied its involvement in Kargil War, but in these many years, it has been proven to be wrong information.We should also consider that Pakistan had a few denials before as well, about the ongoing terrorist activities in the country, including the fact that Osama was caught in Pakistan by the US military.

Today, except accusing the Indian army of killing 2 women in Pakistan, Javed Budhanwi, an MP of Muzaffarabad, has also alleged that the continued shelling by the Indian army has caused fear among 50,000 residents, and also that residents can’t go outside. 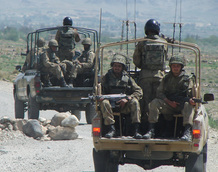 Whatever the assumptions would be, this is going to be a tough test for Pakistan now.