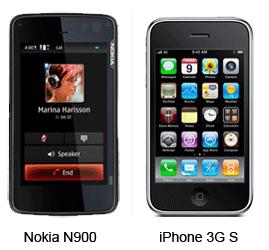 We all know that iphone has been ruling the world of smartphones for the last decade but many companies have been trying to knock Iphone out of the mobile market by introducing their own smartphones. Google Android may have come really close to make a good battle with iphone but still there is a room for improvement in it. However, the recent release of Nokia N900 has changed the way people think. Many critics have labeled Nokia N900 as the type of phone which will at least give a good fight to Iphone. So let us look at some of the reasons due to which N900 is getting popular.
First of all, the working of Iphone is difficult as compared to N900 as many Iphone users have complained about the onscreen keyboard. Its really true as when I myself text while laying on bed, the keyboard gets vertical and horizontal and vertical again. All the time, users fix their phones so that they can complete a text or type whatever they want. On the other hand Nokia N900 has a tactile keyboard which slides through the back of the phone. Moreover, N900 has preinstalled Skype and Gtalk which makes the life of chatting and social networking much more easier. Apart from this, Nokia N900 also has a dedicated camera for video calls. This means that you are not going to use your laptops and computers for making video calls. Your Nokia N900 can actually solve these issues for you.
Nokia N900 has more freedom of chossing Sims of different cellular networks as well whereas Iphone is rumored to be supporting only AT&T network. N900 also has more wide range of accessories as well. this means that users can actually have a lot of option about hands free and speakers for listening and playing video and music files. Flash applications are also available for users in order to play online and web based games.
These are some of the stupendous features of Nokia N900 and I am certainly going to buy this phone so that I am able to further update about functions and usage of this gadget.