According to Taiwan Economic News, iPad 3 will have thinner and lighter battery than iPad 2. The new tablet may also see a lighter, thinner design.
The Taiwanese news said that the new battery of iPad 3 will not only be thinner and lighter than the iPad 2’s battery but it will also offer a longer life and will meet the higher standard needs for quality and reliability. This means that 20 to 30 percent cost of Apple could be increased for it. 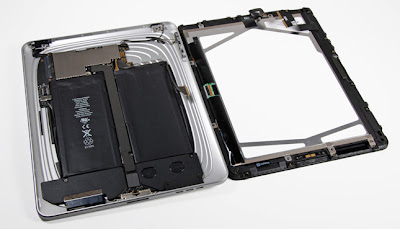 During the fourth quarter, the new battery pack will start to deliver to Apple by suppliers Simplo Technology and Dynapack International Technology and in the first quarter of 2012, it will ramp up into full production.
A thinner, lighter battery might make iPad 3 even thinner than its predecessor, which has a depth of .34 inches, suggested by a Boy Genius Report.
BGR further suggested, it might provide Apple the space it needs to add a Retina Display. The next iPad will support 2,048×1,536 resolution Retina Display.
[Source: BGR]