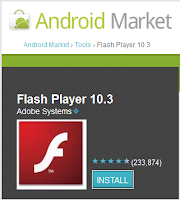 Adobe released the following statement on its official website.
The current build number for Flash Player 10.3 for Android 2.2 and above is 10.3.185.21.  Flash Player 10.3 is a production GA (General Availability) release for Android 2.2 (Froyo), 2.3 (Gingerbread), and Android 3.01 (Honeycomb) devices.
Following are the latest and selected updates in the latest version.
NEON optimizations for OMAP4 based devices has been enabled. Mostly carried out the solution for the video error in Samsung Galaxy S. Apart from solving Samsung Galaxy’s video issue, it has also fixed HTC EVO video crash as well.