Twitter has banned the account of US President Donald Trump citing “the risk of further incitement of violence” following the US Capitol Hill siege and the unrest that happened afterward.

Trump had 88.7 million followers by the time he got banned on Twitter. 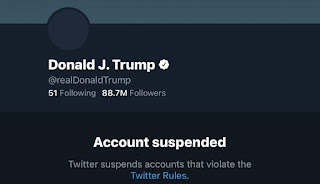