It is the big Sunday as two big sides form English clubs, Liverpool and Tottneham face each other at Anfield, Liverpool. Liverpool have been in blistering form since last few of weeks as they have scored total of 17 goals in their last 5 games.  Let’s take a look at the score line of those games
May 9, 2011 Fulham     2 – 5 Liverpool
May 1, 2011 Liverpool  3 – 0 Newcastle
Apr 23, 2011 Liverpool 5 – 0 Birmingham
Apr 17, 2011 Arsenal    1 – 1 Liverpool
Apr 11, 2011 Liverpool 3 – 0 Man City
Liverpool’s form has improved to a great extent since the arrival of Kenny Dalglish. And looking at the results from Liverpool under the guidence of this ownderful manager, we can say that If the Premier League began with Kenny Dalglish managing Liverpool, Liverpool would have won their 19th title with the strongest goal difference ever.
On the other hand, Tottenham spurs have only picked up one victory in their last 13 matches in all competitions. That’s indeed poor run from Spurs. Also, Gareth Bale won’t be playing today against Liverpool as he is out for the rest of the Tottenham season due to injury.
Liverpool will be playing with the same team that hammered Fulham at Craven Cottage on Monday evening, with Kenny Dalglish unlikely to tinker with a team in such fine form. And what about Steven Gerrard? Do you miss him? Well, I do. I wish him all the good luck with his injury and hope that he gets well soon.
Liverpool vs Tottenham match Details:
Cup: English Premier League
Liverpool: 5th place with 58 points
Spurs: 6th place with 56 points
Date: 15.5.2011
Kick Off Time: 4:00 PM BST
Stadium: Anfield, Liverpool
Result: Liverpool 0-2 Tottenham 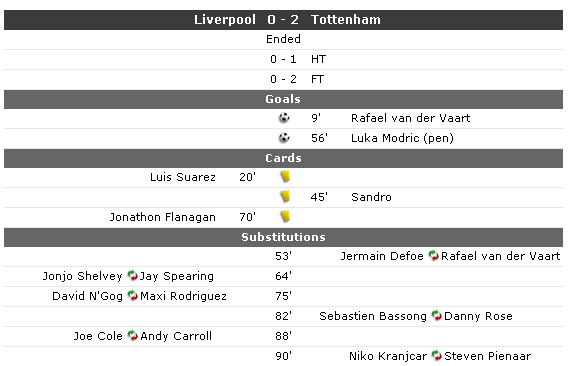