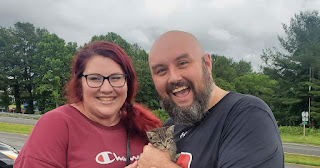 “Angels were watching over her on that 10-hour ride,” said Missy Viars, co-director of Pulaski Animal Care and Control (PACC). “Angel came to us all the way from Kentucky.”

According to the report by WSLS, Viars said the kitten was looking for warmth, and then she entered into a car’s engine before the driver left Kentucky. 10 hours later, when he made a pit stop in Southwest Virginia at the Flying J in Max Meadows, he together a passerby heard her sound.

The owner said he don’t know where she would have come from – that he didn’t leave near anyone who had a kitten.

“They worked to get the kitten out of the engine, and the owner said it’s not my kitty and left, and left him standing there with the baby,” Viars stated.

That’s how she ended up at PACC, where Viars and her team then looked after her.

“We got her rehydrated and fed, cleaned some stuff out of her eyes. Now she’s fantastic,” Viars stated.

While her past remains unknown, and she’s had quite a rough start, she is now with a new loving family to call her own. Viars said she was adopted by a North Carolina couple who are excited to welcome her to the family.


Another kitten named Piper was also discovered in a car engine by a local mechanic. She is still waiting for her forever family. She is at the PACC and can be adopted by contacting the organization.