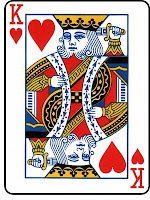 For a period, starting in the 15th century, French playing-card manufacturers assigned to each of the court cards names taken from history or mythology. The most common names for the kings were: * King of Spades: David (a biblical king)* King of Hearts: Charles (presumably after Charlemagne)* King of Diamonds: Caesar (Julius Caesar)* King of Clubs: (Alexander the Great)