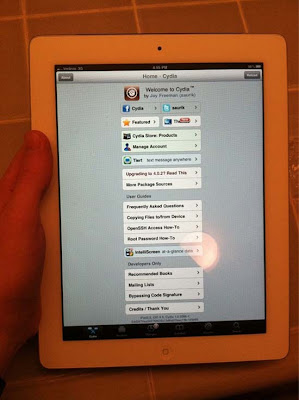 As I’m sure many people have heard, Josh (posixninja) has recently been quoted saying the iPad 2 jailbreak is coming in “weeks”, I know I have been very publicly abrasive and non-commital on giving any kind of timeframe or comment on this matter, but at the behest of Josh (in conjunction with his need for a swift kick to the ass for motivation) we’re ALL going to hold him to that!!! I’m not going to get into extensive detail about this, but what I will say one of the missing puzzle pieces may have reared its head and cast a glance in our direction… take from that what you will.

In the past I have also said that 4.3.x support was on hold for greenpois0n to focus on iPad 2 jailbreak exclusively, our course has slightly changed (primary focus has never shifted from iPad 2 since it was released) it has now become possible to easily update and execute a workflow to enable RC6.2 (tentatively speaking… mmm #dirt) to be released “soon”…

iPad 2 jailbreak with greenpoi0n is not yet confirmed and it is still in progress. Wait for some more time.
[Source]