Since the release of iOS 5 and the iPhone 4S, everyone is looking for jailbreak. iOS 5 is jailbreakable on all devices using Redsn0w or Sn0wbreeze except the iPad 2 and iPhone 4S. But there is a good news  that comes straight from the iPhone dev-team’s member MuscleNerd who tweeted on his Twitter account about the status of iPhone 4S and iPad 2 jailbreak. Along with that, he also posted a picture that shows Cydia running on iPhone 4S and a video on YouTube that shows jailbroken iPad 2 on iOS 5. Check out the Picture and Video after the jump 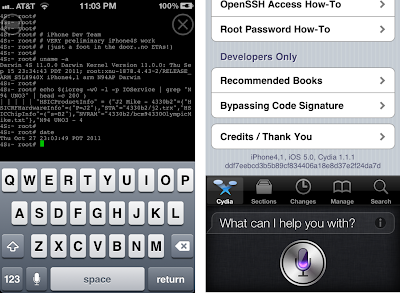 No ETA has been announced yet but it is now confirmed that we will have iPhone 4S and iPad 2 jailbreak on iOS 5 soon. MuscleNerd states that the public release is not avaialble yet because there is a lot of work left behind the jailbreak.
[Via]