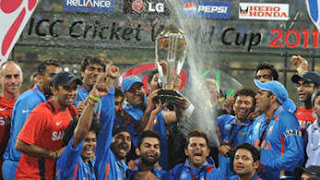 India have won the ICC Cricket World Cup 2011 with the Indian skipper Mahendir Singh Dhoni finished off the match with the massive six against Sri Lanka and won his team the World Cup by beating Sri Lanka by 6 wickets on Saturday, 2 April 2011. After 49 matches and forty-five days of intriguing contest, Team India has emerged as the crowned King of the ICC Cricket World Cup 2011. Brilliantly played by India to win this World Cup 2011. A well deserved victory for India with Dhoni and Gambhir scoring 91 and 97 runs respectively. Sri Lanka scored 274 runs in the first Innings with the hope that they could win this World Cup with that much target but India was unpredictable as they chased that much target within 49 overs. What a game! What a Match! Dhoni joined legendary Kapil Dev to lift the coveted trophy for India. Congratulations to India on this huge Victory.