How to jailbreak iOS 5.0.1 untethered? A few days ago, Redsn0w 0.9.10b1 was released which was a blessing in disguise for the jailbreak community as it allowed them to jailbreak their A4 devices untethered which were on iOS 5.0.1. But there were some errors with that initial release so we waited a bit to post a guide because we knew that redsn0w would be updated to fix those errors. Details below!

One of the errors that the users were facing was the launchctl error. So couple of days ago, the iPhone Dev Team released redsn0w 0.9.10b2 which fixes this issue.

From the team’s blog:

The b2 version of redsn0w includes the launchctl-related fix by @planetbeing as mentioned by @saurik here and here. As usual, you can just re-run redsn0w in jailbreak mode over your existing 5.0.1 jailbreak (even a PwnageTool one), making sure to de-select “Install Cydia” if you do. Always be sure to do a controlled “slide to power off” shutdown of your device before running redsn0w.

But that’s not the end of it, yesterday the iPhone Dev team released another update for the redsn0w jailbreak tool by releasing redsn0w 0.9.10b3. Users who had tethered jailbroken devices running on iOS 5.0.1 were facing crashes due to the MobileSubstrate-based apps. The latest version of redsn0w fixes these issues. The new beta fixes the issue where the MobileSubstrate apps stopped running until MS was installed again when re-running redsn0w over an existing jailbreak. While this would allow to re-run redsn0w without worrying about the stoppage, users shouldn’t forget uncheck “Install Cydia” option if its already installed.

And finally, we are going to tell you how to jailbreak untethered using redsn0w 0.9.10b3.

Supported devices for the untethered jailbreak:

Yes no iPhone 4S or iPad 2, but Pod2g has promised that he will soon find an untethered jailbreak for that as well. iPhone 3GS and 4 users who are depended on carrier unlock are recommended to preseve their baseband. They can follow our guide here to create and restore iOS 5.0.1 firmware using the PwnageTool and iTunes which will allow them to preserve their basebands for the unlock.

A step by step tutorial:

Step 2: Open the latest version of redsn0w downloaded from above, choose “Extras”>”Select IPSW” and browse for iOS 5.0.1 IPSW file. 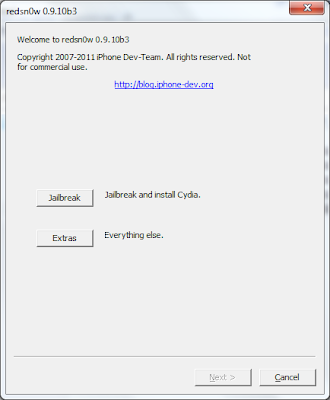 Step 3: Tap on “Jailbreak” and “Install Cydia” (Only those who are not running this over a tethered setup).

Step 4: Follow the on-screen instructions to get the device into DFU mode.

Step 5: After it is finished, the device will be rebooted and the untethered jailbreak on iOS 5.0.1 will be installed on it.

Congratulations! You now have jailbroken your iDevice untethered on iOs 5.0.1.