Inspite of the Hurricane Sandy, Google following the famous saying “ The Show must Go on”, went on with its event, unveiling some of the most important releases- The Nexus 4 smartphone, Nexus 7 and Nexus 10 tablets and the latest Android 4.2 Jelly Bean version.

It will have a list of Google services including–

It is reported that this device aims at giving the users a suitable device for watching movies or reading magazines on its display.

Connectivity options include Bluetooth 3.0, Wi-Fi, micro USB, micro HDMI, dual side NFC and GPS+. Weighting 603 grams, the tablet will have a 9000mAh battery onboard that is likely to offer up to 9 hours of video playback and up to 500 hours of standby time.

There is no info regarding the tablet’s availability in India.

The Nexus 10 tablet proved quite impressive. It is a combo of everything- work, entertainment all-in-one.

Let us see how does it go for the tablet.. 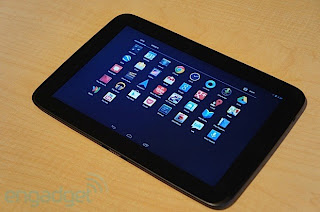