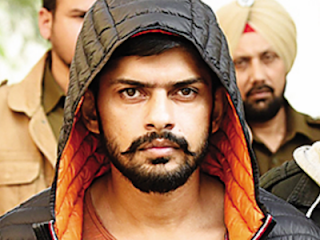 Chandigarh-born gangster Lawrence Bishnoi moved the Punjab and Haryana High Court seeking directions for handcuffing him if he was brought to Chandigarh on a production warrant after expressing “genuine apprehension” of death in an encounter “as done in the infamous case of Vikas Dubey”.

Appearing before the Bench of Justice Gurvinder Singh Gill through video-conferencing, his counsel Prateek Gupta contended that the petitioner was confined in Bharatpur jail of Rajasthan for the past about five years. He said the petitioner, as such, had to be interrogated in Rajasthan. In the alternative, he would be kept handcuffed if required in Chandigarh, Gupta added, while seeking directions for securing his life.

Gupta also sought directions for dispensing with his physical presence in relation to the investigation of an FIR registered on May 31 at the Sector 34 police station for the attempt to murder, house trespass, and other offenses under Sections 452, 307, and 34 of the Indian Penal Code, besides provisions of the Arms Act. Gupta also urged interrogation through video-conferencing.

Gupta submitted that the petitioner was actively involved in politics while he was in college. He was active even thereafter. As a result, he had a political rivalry and was involved in a huge number of cases in Haryana and Punjab. He was now sought to be nominated as an accused in some FIRs in Chandigarh as well.

UT public prosecutor AM Punchhi submitted that the petitioner had himself asked that he might be brought handcuffed and the state certainly had no objection to it. His safety would be ensured under all circumstances.

Before parting, Justice Gill directed Punchhi to furnish information of measures proposed to be taken in case the petitioner was to be brought to Chandigarh. He was also asked to give details of the manpower and vehicle deployment, apart from specifying “whether any arrangement is possible for video-recording the entire transit”.

Bishnoi was to a well-off agriculturist in the village of Dhattaranwali near Abohar in Ferozpur district, Chattisgarh.

Bishnoi hit the national headlines when one of his associates, Sampat Nehra, was arrested from Bengaluru in June 2018. Nehra, son of a former ASI of Chandigarh Police, had revealed during interrogation his plan to killed Bollywood star Salman Khan — who was convicted in the blackbuck poaching case — at the behest of Bishnoi, who is lodged in Bharatpur Jail of Rajasthan and is believed to run his activities using cell phones inside the prison.

In November 2019, when Bishnoi was brought to Chandigarh on warrants for interrogation in the murder case of Rajveer, alias Sonu Shah, a criminal-turned-property dealer, evidence emerged to show that he was using a cell phone inside Bharatpur Jail for extortion, murders, and settling of property disputes. Chandigarh Police had taken up the matter with Bharatpur jail authorities. According to Chandigarh police records, 7 FIRs were registered against Bishnoi in the city — he was acquitted in four of them.