Sepp Blatter, FIFA President, recently supported for greater sanctions such as points deductions and demotion to tackle the act of racism in football. 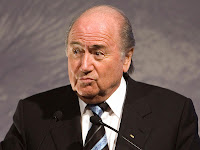 Recently, there have been some severe acts of racism such as the one that happened in the Inter Milan – Chievo match. The fans were doing some racist shouts for former striker Mario Baloteli and as a result of which the team was fined €15,000.

Thierry Henry, the New York Red Bulls striker, also supported the need for curb of racism in an interview to NBC. Currently, such racist acts if found guilty, penalty is levied on the clubs or stadiums are banned; but these measures are not so effective in curbing racism and hence new ways are being thought.