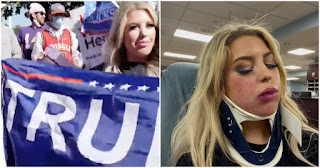 DeLuca was toting a ‘Trump 2020’ flag to not only show support for Judge Barrett, but also for the US President Donald Trump who is standing as a Republican candidate for the 2020 presidential elections.

DeLuca was approached and assaulted while attending the rally by a woman she referred to as a “geriatric older female” according to the National File.

“The first woman was a white older woman – she had glasses on, a glittery bedazzled Black Lives Matter shirt,” Deluca informed National File. “She looked like she could’ve been my grandma, honestly.”

Black Lives Matter protestors grabbed DeLuca’s flag, and was punched when she was attempting to retrieve it. This led other members of the Women’s March to join in hitting, pushing and punching DeLuca.

DeLuca was hospitalized and given a cervical collar because of the damage from the injuries. She had “extensive head and neck injuries, had her lips bloodied, and is also enduring blurry vision and dizziness,” National File noted.