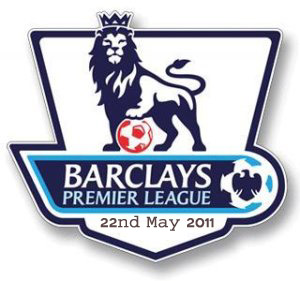 From above fixtures, the most awaited and interesting match would me between Manchester United and Blackpool as the champions are to lift their 19th title at their home in between huge crowd and in a big huge round of applause.
Man Utd, Chelsea, Man City and Arsenal have already secured their position to play Champions League next year. Here is the current position and points of each of these four teams
1. Manchester United with 77 points
2. Chelsea with with 71 points
3. Man City with 68 points
4. Arsenal with 67 points
Before I stop writing, I would like to glance at the relegation zone. These three teams are currently at the dead end
18. Blackpool with 39 points
19. Wigan with 39 points
20. West Ham with 33 Points
Alas! West Ham has already been relegated. However, Blackpool and Wigan can still possibly make their way out of the relegation zone. You can have a look at the full Barclay’s premier table at ESPN