An Egyptian man in his early twenties has named his newborn daughter ‘Facebook’ following the 2011 Egyptian Revolution which was almost solely organized on the social-networking site Facebook. The father, Gamal Ibrahim, told the Egyptian newspaper Al-Ahram that he gave his child the name to “express his joy at the achievements made by the January 25 youth.” 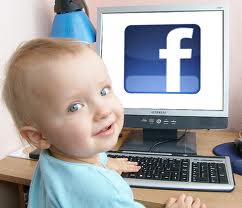 The protests, which were largely organized on social media sites such as Twitter and Facebook, began on January 25 and led to the end of Hosni Mubarak’s 30-year reign as president of Egypt.
The Al-Ahram report stated that, “The girl’s family, friends, and neighbors in the Ibrahimya region gathered around the new born to express their continuing support for the revolution that started on Facebook. ‘Facebook’ received many gifts from the youth who were overjoyed by her arrival and the new name. A name that shocked the entire world.”
Wikipedia