As you might know that since the release of iOS 5 Beta 4, updates have become OTA (over-the-air), means that users who did update their devices to iOS 5 beta 5, will automatically receive update notification once they are connected to the internet. All you have to do is go to the Settings.app followed by General then on to Software Update. 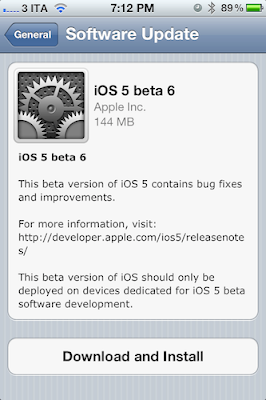 Ofcourse you need to be a registered Apple developer to get iOS 5 Beta 6. If you are not a developer yet and are looking for it, you can buy yearly subscription worth $99 from Apple’s developer website.
I personally haven’t tried any of the iOS 5 betas yet. Though there are illegal means to get iOS 5 Betas without having developer Account but I’m too lazy to try them out.
I guess this is the final beta before the public release of iOS 5 which is expected to arrive this fall and I am very much excited to get iOS 5 beta on my idevices. Are you?