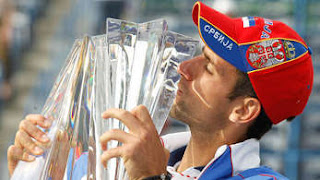 Novak Djokovic came from a set down to upset top seed Rafael Nadal in the final of the BNP Paribas Open at Indian Wells.
The third-seeded Serbian battled for a 4-6 6-3 6-2 victory over the Spaniard to remain unbeaten in 2011, claiming his third title of the year after triumphs at the Australian Open and in Dubai.
Djokovic will take over as world number two from Roger Federer after ousting the Swiss in during the semi-finals.
In the women’s final at Indian Wells, world number one Caroline Wozniacki of Denmark overcame a second-set blip to defeat French 15th seed Marion Bartoli 6-1 2-6 6-3.
Djokovic and Nadal traded breaks in the fifth and sixth games before Nadal broke decisively to lead 4-3 and then closed out the first set with a love service game.
However, the world number one lost all consistency on what had been a strong first serve and the 23-year-old Serbian broke to go 4-2 up in the second set.
He immediately relinquished the advantage by allowing Nadal to break back but hit back in game eight before converting his sixth set-point to level the match.
Buoyed by that success, Djokovic clinched two early breaks in the decider and wrapped up victory – his first in six attempts against Nadal in a tour-level final – with a love service game.
Turning to his opponent at the post-match presentation, Djokovic said: “I wish you the best of luck for the rest of the year.
“It’s always a pleasure playing against you. You are a big champion. For me you are the greatest player ever and a good friend so I wish you luck.”
Nadal was gracious in defeat after being denied a third Indian Wells title.
“For me to come back after a while outside competition and play in the final is fantastic,” said the 24-year-old.
“I lost today but I think I lost against one of the greatest.”
Wozniacki, meanwhile, was thrilled after picking up her second WTA title of the season and the 14th of her career.
The 20-year-old saw her 4-1 third-set lead cut to 4-3 but held her nerve and converted her second match point when Bartoli sent a backhand long.
“In the third set I just kept my head cool,” said the Dane. “We had a lot of long rallies but I came up with the wins.
“I thought if she kept playing like she was, then it would just be too good. But I wasn’t going to give her anything.
“I just love playing matches. I like winning. I like holding the trophy.”
Source; espnstar.com