The Blues are behind Red Devils with the margin of 15 points. This fixture, 1st march 2011, was supposed to be played in December 2010 but it was postponed due to heavy snow.

What could aid Carlo Ancelotti in his bid to drag Chelsea back into the title race, is the fact that his players will be far better rested than United’s, given that their scheduled fixture with Birmingham City was pushed back, as the Blues played Arsenal in the Carling Cup on Sunday night, winning the trophy in a pulsating 2-1 victory. 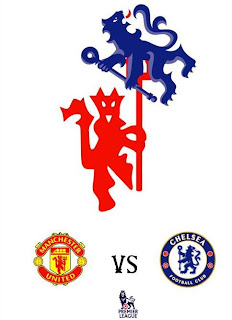 
Ferguson will also have to make tough decisions on who to partner Wayne Rooney in attack at Stamford Bridge, with Javier Hernandez pushing hard for a starting place with13 goals this season, and the Scot could very well leave Dimitar Berbatov out to give the Mexican a run of games to prove his worth.
Man Utd’s defender Nemanja Vidic has siad that he has no fear of Fernando Torres and he may be yet to score for Chelsea since his record £50million move from Liverpool but Vidic says that he holds no fear for the Spaniard
On the other hand, Chelsea skipper John Terry has the utmost desire to win against Red Devils and says that it it important for the club. In the recent interview with Terry, he said

“We are very confident at home and the way they [United] play might help us. I’m not sure how they are going to come at us but other teams that have come to the Bridge have sat back and we’ve found it hard to break them down. It’s just a case of winning the game. I don’t care how that comes about. We just have to be up for it. It is a must-win game for us and the fans are going to be up for it. If we can win, who knows, it could put a little bit of pressure on them and the teams around us. We’ve a game in hand over Tottenham as well and with them losing against Blackpool we could get three points and overtake them.”

Red Devils thrashed Wigan on Saturday by 4-0 and took 4 points lead over Arsenal which gave them more confident for the Barclay’s Premier League title. Nani also said that win against Chelsea and Liverpool this season is vital if they are going to win the league. Nani said