The much awaited and anticipated encounter between two bigwigs concluded this Sunday with Chelsea dominating the feat throughout the 90 mins ordeal of Arsenal. Such was the domination and the control of the winning team, that it almost felt like they were in one of their practice matches. The famous and
traditional 16th minute resonance of Benite’s predecessor seemed to have faded with the teams destiny, as the crowd payed no heed to it. In the end it was an easy 2 – 1 victory. 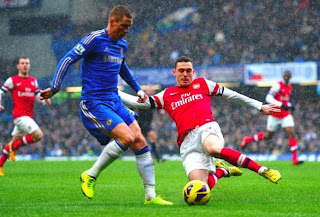 Despite Arsenal’s display of courage and indomitable spirit in the second half, the nemesis of the first half overshadowed the resurrection of spirit. Juan Mata and Frank Lampard spearheaded the attack, while Theo Walcott added the saving grace for Arsenal. This win has assured Chelsea a 11 points lead from their rivals, one that doesn’t seem to be shortening any time soon.