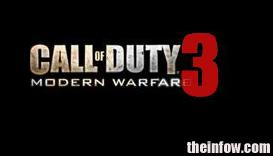 Activision also confirmed that they have plans to make a Call of Duty action-adventure and that they might be going into a new direction with the Call of Duty franchise. The company is also for the first time announcing that a new game in the Call of Duty series is expected to be released in 2011 and that Sledgehammer Games, a newly formed, wholly owned studio, is in development on a Call of Duty game that will extend the franchise into the action-adventure genre. And it is rumored that it will be named Modern Warfare 3. It promises to be extremely realistic like no other game has ever achieve. Not only will it provide beautiful jaw-dropping graphics, it will also allow players to experience the true realistic life of a soldier.
This could be good or bad. EA tried to add new elements of other genres to Command & Conquer 4 and failed badly, but we’re talking about a completely new Call of Duty game here! There will be Call of Duty 8 AND Call of Duty AA (Action Adventure).