As we have mentioned in our earlier articles, RIM has been consistently travelling across the world, promoting its upcoming Blackberry 10 OS.

The Canadian Press gave us news that RIM has sent out invitations to a list of selected politicians for an event in the nation’s capital on Nov. 7. RIM, undoubtedly, will build up a lot of excitement on the Parliament Hill, giving them a sneak- peek of the all new Blackberry 10 OS at the Fairmont Chateau Laurier.

“Get a sneak peek of BlackBerry 10, the next generation mobile platform that will change everything,” the invitation reads.

Invitations have been sent out to Members of Parliament, their assistants, members of Industry Canada and other important regional members.

Government officials have been huge users of the Blackberry right from the beginning particularly because of the devices’ encryption system, which adds another layer of protection to all their confidential information.

Blackberry devices have always dominated over the Parliament Hill despite of strong competitors in the market such as Apple and Samsung. Each Member of Parliament is issued a BlackBerry smartphone when they take the job, and the BlackBerry Messenger service has become the substitute for a quick email.

In other countries, the BlackBerry has also been quite famous among the politicians, including in the U.S. where President Barack Obama said during his first campaign that he relied on the device for securing all their private info.

But, in the past couple of months, several users have skipped from RIM to other devices, maybe due to the delay in the launch of the latest versions.

On Friday, U.S. government adviser Booz Allen Hamilton said that they were shutting down their BlackBerry server and allowed their employees to use iPhones and Android devices.

Also, we have got news that —

Attendees to the November 7th event will have a chance to win a BlackBerry 10 phone or a 4G LTE enabled BlackBerry PlayBook.

Let us see how is it for the Blackberry 10 devices. We will keep you updated. 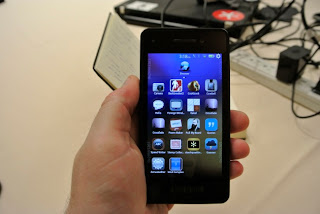