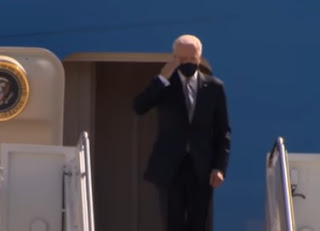 U.S. President Joe Biden is doing fine after stumbling on the steps two times as he climbed aboard Air Force One on Friday, White House spokeswoman Karine Jean-Pierre told reporters.

She suggested high winds at Joint Base Andrews near Washington may have been a reason behind stumbling.

“It’s very windy outside,” said Jean-Pierre when asked about his stumbling. “He is doing 100 percent fine.”

She did not say whether Biden had been checked by a traveling physician after the incident.

Here is the video where Biden was climbing Air Force One: