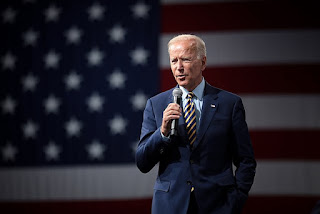 A video surfaced on social media Friday showing the Democratic presidential nominee Joe Biden making a speech to overseas U.S. service members where he called them “stupid bastards” and a “dull bunch.”

During his last months as Vice President, Biden in 2106 visited Al-Dhafra Air Base near the capital city Abu Dhabi of United Arab Emirates and addressed the U.S. Airmen stationed at the base.

In the speech, Biden talks about having “incredibly good judgment” based on his wife and whom he appointed to the academy.

“And I want you to know notwithstanding what you may hear about me, I have incredibly good judgment,” Biden said. “One, I married Jill. And two, I appointed Johnson to the academy. I just want you to know that.”

The military members in the audience and those behind him didn’t applaud, causing Biden to say: “Clap for that, you stupid bastards. Come on, man. Man, you are a dull bunch. Must be slow here, man. I don’t know.”

The Biden campaign has confirmed the resurfaced video Friday afternoon but defended their candidate, saying the former vice president was “jokingly” referring to the military troops as “stupid bastards” and “a dull bunch” to stir the “audience to clap for an airwoman on the stage”.

“Vice President Biden was jokingly encouraging the audience to clap for an airwoman on the stage, and a number of service members can be seen laughing and smiling at the comment. Seconds before, he praised them for ‘the incredible sacrifices [they] make for our country,’” said Andrew Bates, the spokesperson of Biden campaign.

“He thanked them for their patriotism and courage throughout, and closed his remarks by saying, ‘you’re the finest generation of warriors the world has ever, ever known’—receiving an enthusiastic ovation,” added Bates.

Trump 2020 campaign responded to the video and said that Biden should make an apology to the US troops since his campaign has “confirmed the authenticity of the video.”

Joe Biden’s campaign has confirmed the authenticity of the video where he is seen insulting our military men and women and calling them “stupid bastards.”

The video comes after Biden over the past several weeks during a few campaign events he has held has repeatedly criticized presidential rival President Donald Trump over a heavily disputed story from The Atlantic that reportedly alleged he called fallen service members “losers” and “suckers”.

“Mr. President, if you don’t respect our troops, you can’t lead them.” Biden tweeted with a campaign ad video attached that complied shortly from the Biden campaign after the Atlantic story came out earlier September.

Mr. President, if you don’t respect our troops, you can’t lead them. pic.twitter.com/hcX9hGgdm5

None of the four anonymous that talked to The Atlantic reporter has come forth to verify the story and was rejected by over 20 on-the-record sources, including disgruntle former National Security Advisor John Bolton who has been a fierce critic of Trump since last year.

I also wonder why CBS, CNN, NBC, and other mainstream outlets are not giving coverage to this video.