Preview: It is one of the biggest match of the week where Liverpool are making their way to Emirates Stadium to play against Arsenal. Both the teams began this season with a draw. Liverpool with 1-1 against Sunderland while Arsenal with goalless draw against Newcastle at St James’ Park.
Despite being on the verge to move to Man City, Samir Nasri is expected to play against Liverpool today. Arsenal will be facing some difficulties in the mid-field as former Arsenal skipper, Cesc Fabregas, has transferred to Barcelona while Rosicky, Diaby and Wishere are ruled out due to injuries. Recent Arsenal form: WDLDD
Liverpool still have to play this match against Arsenal without their captain Steven Gerrard who is suffering from groin injury. He is expected to return at the end of September. Defender Glen Johnson is suffering from hamstring injury and hence he will miss this match too. Recent Liverpool form: DWDLL 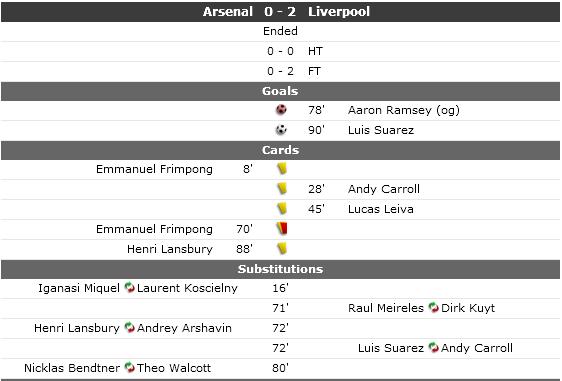