Tonight Barcelona will face Arsenal at Emirates Stadium at 7:45 GMT. Arsenal’s punishment for failing to finish top of their Champions League group is a difficult encounter against Barcelona, which is a fixture to excite neutrals, even if it is a tie that must already have the Gunners seriously considering their longevity in the competition. 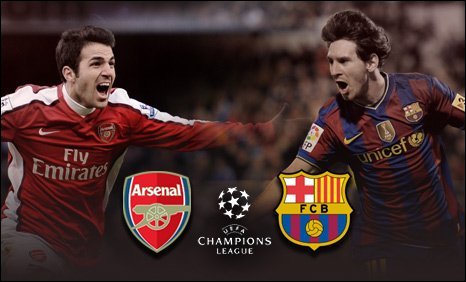 Barcelona made a rare slip at the weekend, when their record breaking run of consecutive victories came to a halt against Sporting de Gijon at El Molinon. After falling behind in the first half, la Blaugrana struggled to haul themselves back into the match, and it took until the 80th minute for David Villa to strike the levelling goal.
“Now we have to recover to play in London,” Guardiola said after the match, looking ahead to a testing European affair. “The fault is not with the team; when you are at this club you know you will have to play every three days. In sport there are always things to overcome.
“We may lose this league, the Champions League and the Copa del Rey, but we will make sure that we fight until the end.”
Arsenal Updates
Samir Nasri has been named in the Arsenal squad to travel to Spain, while Tomas Rosicky is another struggling with a knock.
Thomas Vermaelen and Lukasz Fabianski are injured, while Bacary Sagna is suspended.
Barcelona Updates
Carles Puyol has been ruled out of this encounter, and Jeffren is the other visiting player who will be sidelined.