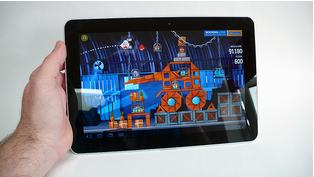 Samsung is among the companies that have issued a response to Apple’s introduction of the iPad tablet device. Samsung’s Galaxy Tab 10.1 is popular because of the value it offers its customer. The Samsung tablet device has many similar features to the iPad and it is offered at a better price. Many consumers seeking a bargain with their mobile broadband device are taking a good look at the Samsung Galaxy Tab 10.1 compared to Apple’s iPad.
How Does the 4G Galaxy’s Price Compare to iPad’s Price?
Samsung offers the 4G Galaxy for $100 less than the iPad is currently offered. The prices for the iPad range from $499 to $829. One of the primary differences between the iPad and the Samsung Galaxy are the operation of 3G and 4G technology, respectively. Samsung also offers consumers Flash technology, whereas the iPad does not. Since users will receive a lower price for purchasing the Galaxy Tab 10.1 and a couple of features iPad does not offer, experts do not consider this a bad investment. However, some consumers will still purchase the iPad because of brand loyalty.
How Does 4G Speed Compare to 3G Speed?
Most tablets utilize mobile broadband networks, Wifi or other home or business networks for Internet connectivity. Download speeds vary based upon whether the device is operating on the 4G or 3G network. However, comparing 4G networks to 3G networks is not as easy as one might expect. Some aspects of the 4G Samsung Galaxy are faster than the 3G iPad. The differences will be highlighted below.
For instance, the Samsung 4G Galaxy Tab 10.1 has download speeds of five to 12 mbps for data. The iPad, on the other hand, only has download speeds of 3.1 mbps. The difference is negligible in reality, since most consumers only notice a two to three second difference. Customers on the 3G network will operate with a frequency band between 1.8 GHz and 2.5 GHz, but the 4G network frequency range is much higher. Consumers on this network experience faster processing speeds, ranging from 3.0 GHz to 8.0 GHz.
Though the reported speeds of the 4G networks are significantly faster than 3G networks, in practice, the fastest speeds are rarely achieved. The speed depends upon the number of people on the network and the configuration of the network. Users should always make certain they have optimal conditions to achieve the fastest speeds. As a result, users testing the 4G Galaxy Tab 10.1 against the 3G iPad will only notice a small difference depending upon the application.
For instance, iPad 2 users have found that their devices are faster than the 4G Galaxy when using Facebook and other social media. Android tablets, such as Galaxy Tab 10.1, achieve faster speeds than iPad 2 when consumers surf the web. Again, this data was collected under ideal network conditions and users only noticed faster speeds of two or three seconds, in most instances.
How does the 4G Galaxy Compare in Terms of Other Features?
As stated earlier, the 4G Galaxy is remarkable similar to the iPad in terms of features, size and usability. In fact, the features are so similar that there is a pending lawsuit between the iPad producers and Samsung regarding the similarities. Though they are similar, there are some benefits to purchasing a 4G Galaxy over the iPad tablet computer.
Lack of Flash technology is one of the primary reasons some people have not purchased the iPad. Many users have considered Samsung’s Galaxy Tab 10.1 as an option, because this device does feature flash. Consumers requiring Flash may purchase this tablet for $100 below the retail value of the iPad.
Some consumers also enjoy the Android operating system that is featured on Samsung’s 4G Galaxy tablet. The Galaxy Tab 10.1 is optimized with the Android 3.1 “Honeycomb” platform. Consumers may also upgrade their current operating system to the Android 3.2 technology. The updated version addresses some of the bugs in the previous version. Many consumers like the capability of the Android operating system over Apple’s iOS operating system.
Both the Samsung Galaxy and the iPad 2 only have one docking and charging port. Therefore, dongles and adapters are necessary for USB ports, HDMI ports or SD ports. Experts recommend the Motorola Xoom for users that would prefer built-in ports.
About the Author: Blake Sanders writes at UK broadband comparison site Broadband Expert and specializes in mobile broadband, mobile phones, and the latest in internet provider news and information.
Note: Photo courtesy of cmmorrison via FlickR Creative Commons.